Bullying is not something new but it is a problem that we don’t always know how to handle as teachers, educators or parents.

We all know that bullying has spread over the past decades. What we tended to simply call as a “growing up process” is now treated as it should be: a harsh constant intolerable harassment. It does not matter who you are. It can hit you any time whether you’re Black, White, heterosexual, gay, with ginger hair, a girl, a boy, clever, tall, short, fat, slim, Muslim, Catholic…The list is endless. We know that.

Last year for the Bullying Month I was invited by the Embassy of the United States in Spain to deliver speeches in different schools in Madrid, Valencia and Cartagena. The idea was to raise an awareness about bullying and the point was to work on prevention rather than working on the cure. I focused on explaining what bullying was and highlighted the factors leading to it. We also discussed about the common and less usual warning signs that a child or teenager can be bullied. I insisted on the fact that communication was the key to prevention. Communication between parents, teachers and students.

Bullying must not to be dealt with as part of a difficult growing process. Bullying is a behaviour. As such it can be changed. How? By involving the three members part of the process AND their families. We CANNOT as educators fight bullying alone. Nor can parents of the victims and witness. This is a common process.

For example, how can a teenage girl explain that she had some videotaped intercourse and that it is now all over the Internet? How come this girl had never spoke about her personal struggle? The answer is simple. Talking about bullying is difficult.

That may sound unreal for some of us as adults but teenagers put themselves in dangerous situations and once it is done they don’t have a clue how to get out of them. Other children or teens are also simply victims of constant harassment because of their social, religious or family background. How can some little boy explain that he suffers because some students are constantly harassing him because of simply who he is? Bullying is cruel and everywhere.

Let’s not turn a blind eye. By understanding bullying must be addressed with parents and explained to parents before students even start school. They need to be told that it is a serious concern and as such it will be addressed not only with their children but with them as well. Let’s not forget either that in most cases of bullying the child who bullies has been deprived from a home with solid moral values. Some bullies are also themselves victims of verbal or physical abuse. The idea here is not to blame the bully or his parents the idea here is to provide help to get the necessary change in behaviour. 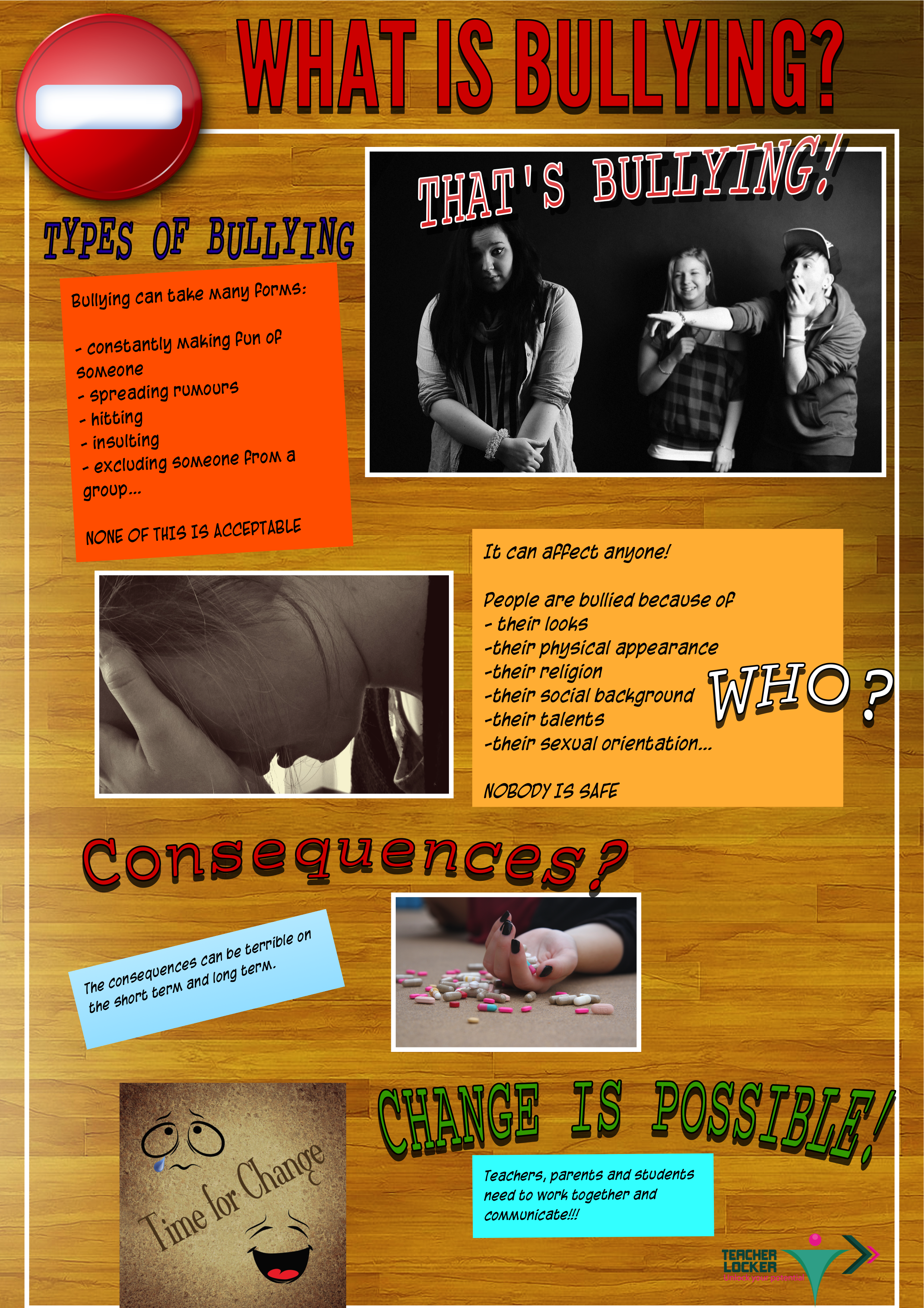 Bullying can be prevented as long as we know that bullying does exist from Kindergarten.

As for schools the message must be clear with all the teachers and members of staff. Creating a solid code of conduct is part of the message but even better when the parents and children take an integrant part in its elaboration. Teachers should do activities in class, groups of discussions should be held with the school community, workshops should be done about the responsibilities, rights and duties of living in a community and in a society.

Understanding bullying, First step is to take it seriously. Children and teens must feel free to talk to adults without being judged or prejudiced.

Changing a behaviour takes time. It can take months and even years but it is everyone’s responsibility to address the issue. Everyone should stand against Bullying. Campaigns are a good way for awareness but the Month of Bullying is clearly not enough. The virus doesn’t spread just during one month. It’s all year long.

To sum it up, understanding bullying it’s about knowing prevention is much better than the cure in terms of bullying as the consequences of bullying have huge traumatic impact on the three main characters of the program. Postponing any action to fight the issue can have huge consequences on the short and long run. I would just add here that children and teens face the problem every day at school and through online devices but it is now up to us as adults to consider the real impact it can have on our children and students.